We had a marvelous May !! 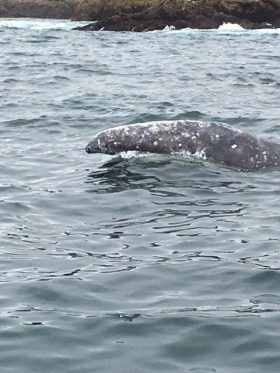 May was a fabulous month. Some really neat things happen in May.

One of my favorite things is the appearance of crab larvae. A crab’s life cycle begins with an egg. This egg hatches and goes through a series of moults, until it finally reaches an adult.

The larval stage only lasts for several weeks, and then the larvae become juvenile crab and settle on the bottom.

The crab larvae have no swimming ability, and they are carried about on the ebb and flow tides. Sometimes this results in a great abundance of larvae in a particular area.

The water in May has been very clear, and on several trips we could walk around the deck of the Nootka Princess and peer down into thousands and thousands of larvae on and about the surface of the ocean.

Gray whales are generally bottom feeders, ‘suction feeding’ on the seabed. However, when there is a large amount of larvae, they can be observed swimming at the surface with their mouths open sucking in the crab larvae !

This is an amazing whale watching show, only taking place before the larvae continue to moult and settle to the bottom. We were able to leave the Ucluelet Harbour and take a short boat ride to the West (Wya Point) and witness this behaviour several times. It was a unique opportunity to see their baleen as they fed.

We also had a couple of sightings in May that we weren’t really expecting ~ a mola mola (Pacific Sunfish) was spotted just as we exited the Broken Group Islands and Pacific Rim National Park and we also saw a brown pelican at Starlight Reef (one of my favorite places to look for birds like oystercatchers, bald eagles and cormorants, as well as sea otters, sea lions and harbour seals)

It just goes to show that you never know what to expect ! The wildlife out of Ucluelet is wild, unexpected and incredible, and every trip at Cameron Ocean Adventures is one of a kind !